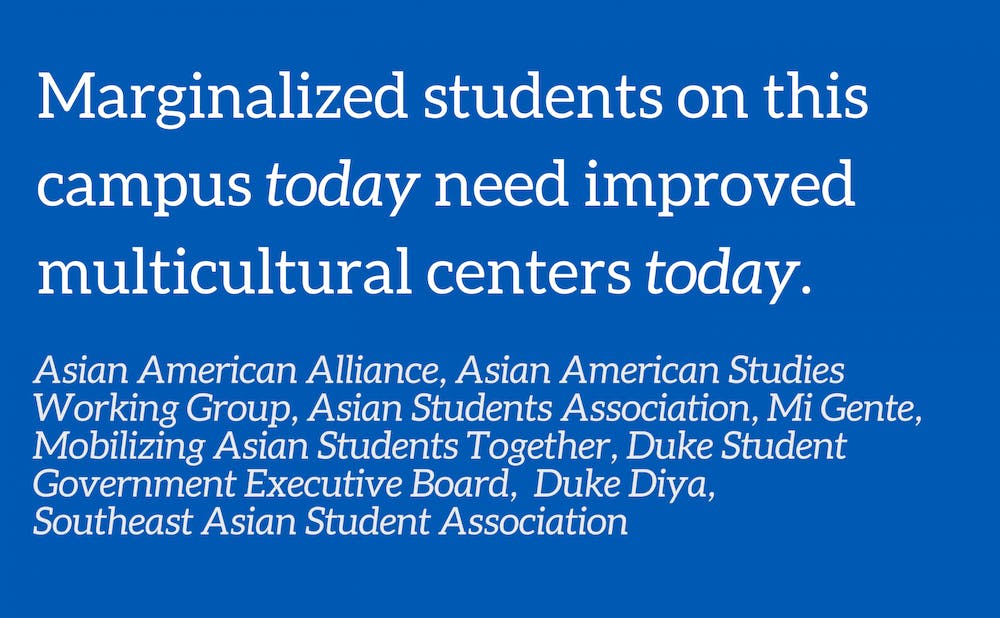 As such, we are unequivocally disappointed and frustrated to learn that the Duke administration has promised the Bryan Center student affairs office that vice-president Mary Pat McMahon and her team will be leaving for the Career Center in December. They made these promises without input from students and behind the backs of student groups, even though they had promised this space to several organizations, and many student groups repeatedly communicated their space needs to the ‘administration. They made this deal behind closed doors, without student input, although they previously promised space to several groups of students who have been asking for more space for decades.

Asian students, Latinx students, black students, Indigenous students, and students with disabilities have all posted demands, including improving cultural spaces on campus over the past five years. Additionally, these demands date back decades, going back at least to the 1990s with Spectrum, a multicultural student coalition, making multiple demands and proposals for a multicultural student center. Marginalized students have been sidelined and ignored by Duke. Many student organizations have raised the issues of the space policy of the Center for Multicultural Affairs (CMA) located in the basement of Bryan Center and the constant promises of inadequate spaces being “temporary”. These spaces are often inaccessible to students with certain disabilities and invisible to all students.

As students and student organizations, we have always done our part to reach out to Vice President McMahon and other members of the administration at Duke University to voice and address our concerns. Nonetheless, the deal between VP McMahon and the Career Center was made without any feedback from us, although we had previously pledged the space to groups such as the Hindu Student Association and Duke Disability Alliance. While we recognize that the Career Center provides the necessary services to the student body, the services of the Career Center are largely remote. Student organizations have regularly had problems with insufficient space for events, meetings and programming, and as such, they have a much more urgent need for this space. We were only made aware of the decision to move the Career Center to the Bryan Center when members of the student government at Duke learned about student affairs and the Career Center privately arranged the move-in dates and even the plans. furniture for the space since at least the summer of this year. Additionally, according to a survey conducted by Duke Student Government asking all undergraduates what their preference for space allocation is, only 63 of 447 respondents, or 14% of the votes were for the Career Center, while that 233 of the 447 votes, or 52% of the votes were for some version of an identity, cultural or religious center.

The Bryan Center is a center of students, and as such, student voices and agency should be at the forefront of how this space is used.

We are here and we ask to be heard.

Get The Chronicle delivered straight to your inbox

Subscribe to our weekly newsletter organized by an editorial. Cancel anytime.