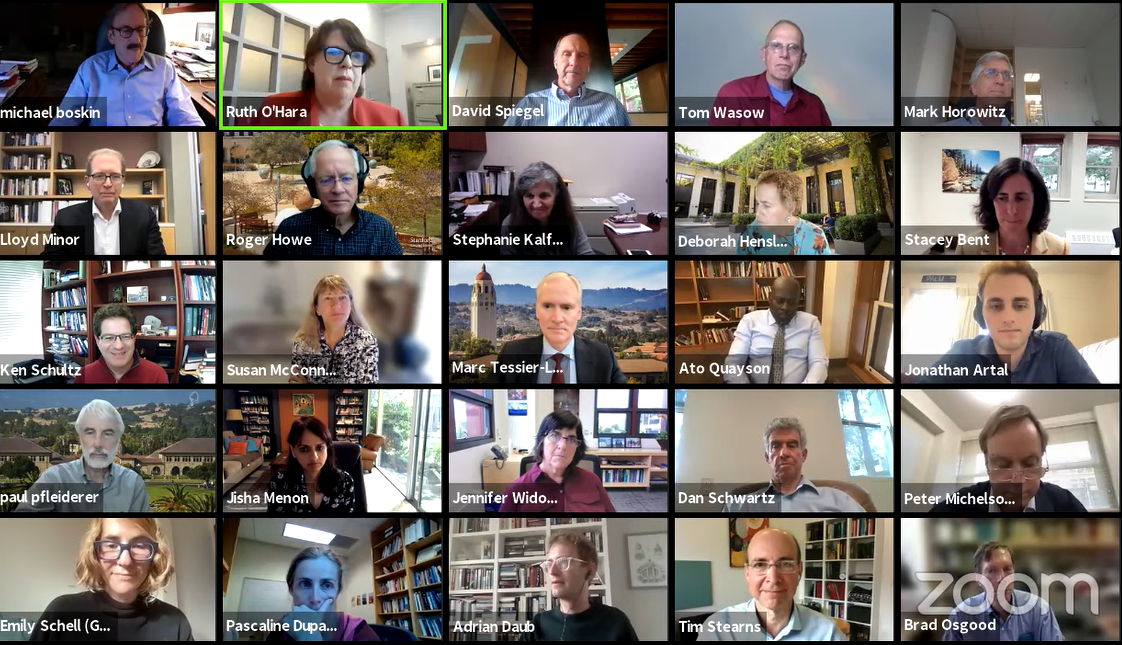 Despite a high number of vaccinations among community members, a small number of unvaccinated health care workers at Stanford have been placed on unpaid leave, medical school dean Lloyd Minor said in an update. day on the COVID-19 pandemic at the Faculty Senate.

After university president Marc Tessier-Lavigne’s remarks in the Senate, he was invited, but declined to condemn Stanford affiliates who spread misinformation about COVID-19. The request from epidemiologist and professor of medicine Julie Parsonnet came a month after more than 100 faculty members sent a letter to Tessier-Lavigne urging the University to call out its professors who are spreading misinformation.

“We would like to ask you now in the Faculty Senate, when will the University vocally defend public health, in the United States, and expose those who, instead of productively contributing to the fight against this deadly virus , will use their affiliation with Stanford to sow dissent and distrust of the public health response, ultimately contributing to our country’s tragically high death toll?” said Parsonnet.

Tessier-Lavigne responded by touting the steps the University has taken to combat the COVID-19 pandemic, including being one of the first colleges to require students to be vaccinated to return to campus this fall.

This is not the first time that Tessier-Lavigne or Stanford have faced this problem. Last year, more than 105 doctors and researchers at the School of Medicine condemned Hoover Fellow Scott Atlas in an open letter after the University refused to speak out against his controversial views.

It wasn’t until Atlas urged Michigan residents to “rise up” against the new lockdown orders that Stanford distanced itself from him, issuing a statement that Atlas’ position was its own and that his views were “inconsistent with the university’s approach to responding to the pandemic”. Last November, the Senate voted to convict Atlas by an 85-15 vote.

“I think we’ve adopted a very clear standard at Stanford when it comes to public health because of the steps we’ve taken for our community and the messages we’ve put out around that,” Tessier-Lavigne said, noting that he also thinks that “if the University were to start slamming faculty members for the opinions they hold, we would be entering very troubling territory.

In his report, Minor gave an overview of the pandemic in California, which he said has the lowest number of cases per 100,000 in the United States and counties in the Bay Area, he added. , have some of the lowest infection numbers in the state. Stanford Hospital is currently treating 14 patients for COVID-19, most of whom have underlying medical conditions that make them more susceptible to the virus, he said.

Minor also explained how Stanford employees will be required to get vaccinated by Dec. 8 in accordance with President Joe Biden’s Sept. 9 executive order regarding federal employees and contractors. Since Stanford receives federal funding, the rule will make it mandatory for all Stanford employees to be vaccinated, including those “who don’t come to campus.”

The medical school dean said 98% of Stanford Medicine employees have been vaccinated. The California Department of Public Health has required all health care providers to be vaccinated by October 1.

“As of today, less than 0.3% of the workforce is on unpaid leave, and that number continues to drop as more and more people achieve vaccination status,” he said. declared.

Regarding the greater Stanford community, Minor said that more than 97% of affiliates performing daily health checks have provided documentation of vaccinations and that the University is actively reaching out to those who do not perform checks. health.

A senator asked Minor about breakthrough cases and herd immunity and noted that the majority of cases treated at Stanford Hospital are breakthrough infections, meaning they are in vaccinated people. Since COVID-19 can still be contracted regardless of vaccination status, “we need to re-examine what the term herd immunity means.”

Parsonnet echoed Minor, explaining that “there will never be herd immunity”, especially since “asymptomatic people” and “people who are immune and who have antibodies can transmit the virus”.

Bent briefed the Senate on the impact of COVID-19 on graduate students and diversity within graduate programs.

“Graduate students and postdocs have experienced significant disruption due to the pandemic,” Bent explained, adding that they faced challenges related to research delays, job insecurity and access to child care services. However, graduate graduation was not significantly affected in the 2020-21 academic year despite the challenges of the pandemic.

According to Bent, women in STEM and female students who identify as underrepresented minorities (URMs) are the fastest growing demographic group among graduate students and postdocs, and the University is poised to enroll the largest cohorts of URM and women among STEM graduate students to date. University.

Bent attributed part of this trend to recruiting efforts by faculty and admissions committees and the fact that many graduate programs have suspended standardized testing requirements.

Bent announced the Research, Action, and Impact for Strategic Engagement (RAISE) Doctoral Fellowship Program, which aims to help graduate students have a positive public impact on their research, and the new PRISM-Baker Fellowships, which aims to support the diversity of postdoctoral researchers by providing financial support to fellows and professors.

Fourth year doctorate. Student Emily Schell, Graduate Student Council representative on the Faculty Senate, raised concerns expressed by members of the graduate student community regarding housing insecurity and the cost of health care. Schell pointed out that the cost of Cardinal Care, the health insurance option sponsored by Stanford University, is “significantly higher” than the cost of similar options at peer institutions.

In light of these concerns, Bent shared resources such as expanded family scholarships for graduate students and postdocs with dependent children, as well as the five-year funding commitment for doctoral students recommended by the Task Force on affordability.