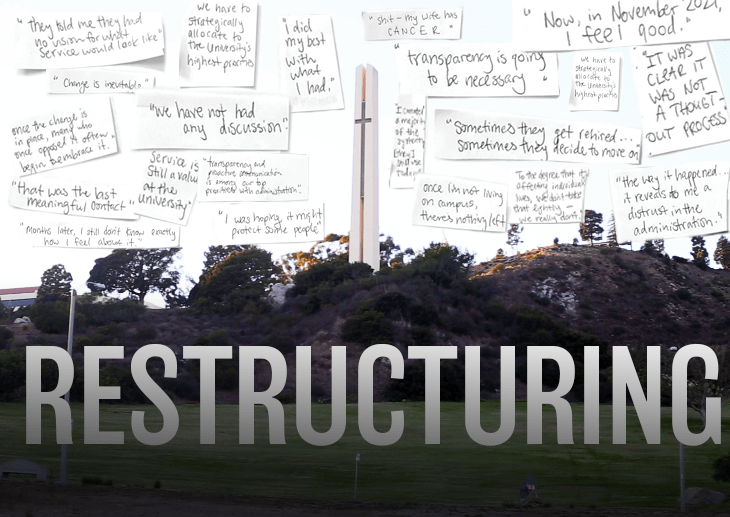 Pepperdine’s mission statement asserts that students are “strengthened for a life of purpose, service, and leadership.” The draft 2030 strategic plan echoes this: “Service is a core value of the University, and Pepperdine asserts that knowledge ultimately calls for a life of service. »

Thompson joined PVC in 2011. While at Pepperdine, Thompson said he worked to make PVC a “laboratory of social justice” – a place where students could engage with service in a practical way. .

“It’s not an opportunity thing,” Thompson said. “It’s a chance to experience, connect and realize your place in a global vision of justice in the world.”

Thompson added Rivero to his team in 2013, fresh out of his undergraduate program at the University of California, Irvine. In 2018, Rivero became an assistant director amid a turbulent time for Pepperdine and Thompson.

“I moved into 2018 as an assistant director during the days of Woolsey, Borderline and when Peter was diagnosed with brain cancer,” Rivero said. “I was, at that time, the acting assistant director, a kind of acting director while he was on sick leave.”

Thompson and Rivero oversaw a variety of projects, but there were two department-specific branches – Jumpstart and Everything Else.

Jumpstart is an AmeriCorps program that places students in preschool classrooms to help prepare children for kindergarten.

Pepperdine’s Jumpstart program began in the early 2000s. Associate Dean of Student Affairs Brad Dudley and Seaver Associate Dean Kindy DeLong — then both in different roles — wrote the program proposal in the fall of 2001 and the program was launched in May 2002, Dudley said. Since then, the program has employed hundreds of students and is one of the largest chapters in the United States.

“Everything Else” includes the staples of the PVC – Step Forward Day, Project Serve, blood drives, academic service-learning assistance, and the establishment of an annual service-learning workshop.

Thompson and Rivero were the two full-time PVC staffers in 2020 before Pepperdine became distant. Stacy Rouse and Savanna Davenport oversaw the Jumpstart team as program and site manager, respectively.

Thompson had a similar experience to Peterson when he was fired – a strange sequence of events leading to a mysterious calendar event that disrupted his afternoon. At first, he said he was trying to reassure himself: “Service is part of the mission, it’s Pepperdine’s hallmark.

When he got the call, however, Thompson was convinced it was just him who had been fired. Instead, he learned that the entire department would be disbanded and Rivero’s position was eliminated.

“It was the biggest hit,” Thompson said.

Rivero received the same treatment: a 10 a.m. calendar notification of a 2 p.m. meeting scheduled for the same day. But he noticed his colleagues at Jumpstart had another call at 2 p.m., speaking to supervisors of student employment instead of human resources.

Thompson and Rivero said they received neutral responses from supervisors about why they were being fired, they heard references to budget and strategy. Thompson said he believed that as director and assistant director they took the PVC in “a direction the new administration didn’t want the department to go in”, which prompted the layoffs.

In the weeks that followed, Thompson and Rivero had nothing to do but meet with the Hub and hand in their work.

“We were still employed, paid by the University [but] shouldn’t work,” Thompson said. “It was very clear that it was not a thoughtful process and no one knew what they wanted from me.”

For Thompson and Rivero, it seemed like the Hub for Spiritual Life staff had also been caught off guard during the transition.

“I’ve had meetings where the Hub was asking me questions, sort of general questions, because they told me they had no vision of what the service would be like,” Rivero said. . “They gave access to all my files to new staff, and they are currently using it.

In a June 11 email to the Graphic, Horton wrote that service “remains central to Pepperdine’s identity” and is a “mission-critical priority of the University.”

Thompson said many of the GPC programs and changes he sees are changes he has advocated for, such as elevating the service to the president’s office.

Rivero echoed his sentiments — he worked on proposals to cut GSC’s budget and create more sustainable programs, which he said student affairs rejected.

“I also created the majority of the systems that Jumpstart and the Hub’s service model still use today, whether it’s partner relationships, resource organization, training structure” , Rivero said. “I have changed the training programs so that we both have in-person and remote opportunities for students.”

The Seaver Dean’s Office and the Hub for Spiritual Life have taken on service learning, according to a June 7 email to Seaver faculty and staff.

“Our efforts to detail support for community learning are also in their preliminary stages, but will be ready for the start of the new academic year,” Seaver Dean Michael Feltner wrote in the June 7 email.

Service learning was a growing pillar of the Seaver experience, Thompson said. Prior to COVID-19, the program had 82 courses taught across the college. Thompson’s goal was to have a service-learning direction within academic divisions to match students’ degree paths. The student would then engage the community in a capstone course, creating real impact locally.

When the PVC shut down in May, Jumpstart remained mostly intact, functioning as before, Rouse wrote in a Nov. 10 email to The Graphic.

“Although not identical to before, the way things have changed is minimal in the big picture of the reorganization,” Rouse wrote.

During the transition, Jumpstart did not add any staff positions, but some student employment supervisors received additional compensation to recognize Jumpstart’s additional responsibilities, Horton wrote in a Nov. 15 email to the Graphic. .

Student employment has always been a primary partner of Jumpstart, Dudley said, due to program funding, paperwork and background checks required by Jumpstart. All Jumpstart student leaders receive payment through a federal work-study program or a Pepperdine work-study program.

The University has not communicated that the Hub for Spiritual Life has been responsible for PVC programs since May; the only announcement came from the since-deleted PVC social media account.

“I also think it happened at a very intentional and specific time because the campus was still closed, so the renovations and re-opening of the Light House and the Hub took attention away from the fact that PVC doesn’t no longer exists,” Rivero said. “I think it may have distracted people who have always contacted the names on the website.”

One of the terms of Rivero’s employment was a percentage of tuition assistance for his enrollment at Pepperdine for his Master of Arts degree at Seaver. When he was laid off, he had to fight to keep his financial aid to complete his higher education.

Thompson received a special offer – a one-year contract at Pepperdine beginning August 1 as a Jumpstart employee that allowed him to remain in his on-campus housing.

Thompson worked for Jumpstart for about a month, he said, after his role as director ended on July 31. He decided to stop working with Pepperdine altogether in September.

“We already figured out when would be the right time for my family to move forward and we didn’t have to think about that part too much,” Thompson said. “Once I don’t live on campus too, there’s nothing left.”

Thompson has accepted a position with the Institute for Human Development at the University of Missouri-Kansas City, as grants writer and director of program development. Thompson moved his family to Missouri in mid-November, severing his last physical tie to college.

Rivero is finishing his graduate program and once he is done, so is his time at Pepperdine. He said that experience revealed to him that Pepperdine created standards for who should or shouldn’t work at Pepperdine, and clearly it wasn’t him.

As the only non-Church of Christ employee who is a person of color at the PVC — and the only one not offered continued employment of any kind, he said — Rivero has said he believed these factors weighed in his dismissal.

“The experience I have, the identity I bring and the connection I have to the work, no matter how much I knew it and how well we did it – because I think a lot of our measures were successful – I felt disposable because I fell out of that Pepperdine mold of student affairs,” Rivero said.

A Day in the Life of a College Student: Books – The Oracle