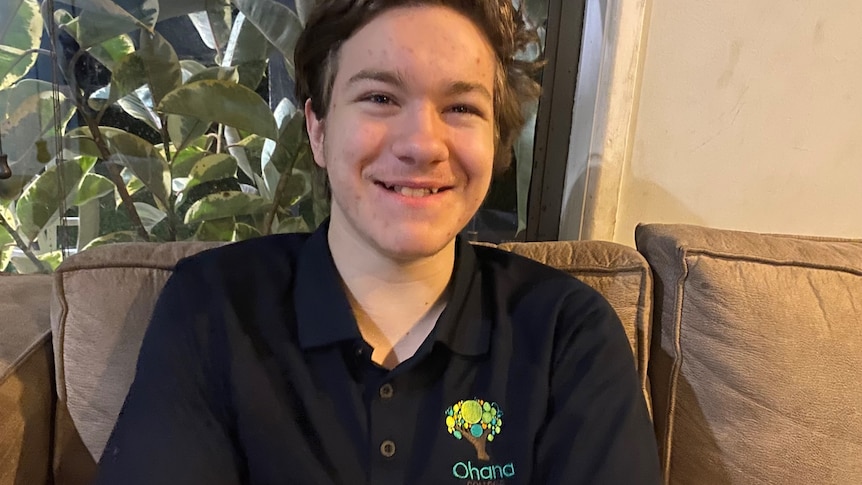 The large class sizes and rigid structure of mainstream education did not sit well with 15-year-old Xander Hughes.

Regular school teachers lacked the resources to educate and support her son, his mother Michelle said.

Xander had been kicked out of two schools and was spending a lot of time at home when Michelle found Ohana College, a school with an alternative approach to education.

When he interviewed for college, Xander felt it was the right place for him.

“I think it’s like any other school but a bit more open to understanding a student’s issues,” he said.

The 10th grader has made new friends by joining clubs and societies at school.

“Everyone in the club was welcoming and chatty and made me feel like I belonged there,” Zander said.

Ohana College is a small independent school based in Browns Plains, supporting its current cohort of 91 students in grades 7-12.

Established in 2016, the school was designed for students who had disengaged from mainstream school; for example, if they had family or social problems, medical diagnoses that prevented them from attending a typical school, or other health problems.

A new partnership between Griffith University and the independent Logan School for Disengaged Students will hopefully provide these teens with better learning or career paths.

The college is expected to expand to more than 300 students in the coming years and has reached an agreement with Griffith University to relocate to the university’s Logan campus, providing Ohana College students with internships within university and research opportunities.

“We worked with them to get access to land on their Logan site.

“The idea will be to grow our school over time to 300 enrollments and work in partnership with Griffith University to improve our student welfare, education and some research outcomes.”

Students can consider a future career

On their first day at school, Alex’s brother Riley was “nervous” about attending a non-traditional school, but they soon realized it was fine with them.

“There are many amazing things about this school, such as prepared meals, classes that meet your needs, and all the staff and students make you feel like you’re always included,” they said.

“My favorite thing is clubs and societies – being able to join a club you like and become friends with like-minded people is exciting.

“Being at Ohana College has helped me figure out what I want to be when I’m older, I imagine myself running my own business, probably carpentry or landscaping.”

Griffith’s Logan Campus is based in Meadowbrook and serves approximately 2,000 students.

A school campus is being built for Ohana on site, with the school expected to leave Browns Plains in time for the first term of next year.

Ohana College has small classes of about 15 per class, with one teacher and one teacher’s aide in each.

And almost all students follow individual programs tailored to their specific needs.

“We personalize learning for each student based on their medical diagnosis or personal situation,” Devine said.

“Food is an important part of supporting them in their learning and making sure they’re ready to learn,” he said.

The college is sister to Arcadia College on the Gold Coast, which has a similar partnership with Southern Cross University.

Ohana’s first cohort of Grade 11-12 students graduated last year, with the school hoping the partnership with Griffith University will give these students a chance to explore what they want to do next.

Griffith Vice-Chancellor and President Carolyn Evans said the university is interested in working with Logan’s youth.

“This is another step in Griffith’s plans to ensure we work with partners to make the Logan campus a hub that supports local communities and meets their needs.”

Devine said Ohana will grow to about 116 students next year, meeting demand from the Logan community.

“It’s an exciting place, there’s really significant growth in this community in all areas – education, health, everything,” he said.

The shift from chaplains to welfare workers to lay students can be divisive.…

MARESA will organize a conference on student welfare