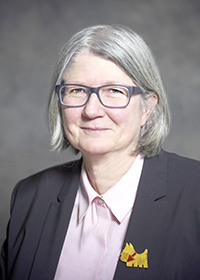 Henking, who takes office July 1, was selected after an extensive national search that began last fall. She succeeds Cindy J. Speaker, provost and dean of the college, who will leave Wells at the end of this academic year, according to a March 3 press release from the college.

Henking is a religious studies teacher-researcher whose work has focused on cultural understandings of American religion, as well as the theoretical and conceptual relationship of religion to gender and sexuality.

For more than 25 years, she taught in the Department of Religious Studies at Hobart and William Smith Colleges (HWS) and was named Distinguished Professor of Religious Studies in 2015. While at HWS, Henking also occupied many other roles, including several stints as department head; acting dean of the faculty (1998-2000); and provost and acting dean of the faculty (2000–01). She also co-founded the Hobart and William Smith LGBT Studies Program, the first stand-alone program of its kind in the country, and served as its president for more than a decade.

In 2012, Henking became President and CEO of Shimer College, a small college then located on the South Side of Chicago that became part of North Central College in Naperville in 2017. In 2017, she was named President Emeritus and also received an honorary doctorate in recognition. of his service to the institution. From 2019 to 2021, Henking served as acting vice president of academic and student affairs and then president of Salem Academy and College, one of the oldest women’s colleges in the United States.

“Dr. Henking’s leadership style and career path make him an exemplary choice for Wells College,” said Wells College President Jonathan Gibralter. “As a seasoned faculty member who has held a wide variety leadership roles, she is well prepared to meet the specific needs of our College and its entire community.”

Henking earned a bachelor’s degree in religion and sociology from Duke University. She then earned her master’s degree from the Divinity School at the University of Chicago, where she also earned her doctorate. in religious and psychological studies.

Wells College is a private coeducational liberal arts college located in Aurora on the eastern shore of Cayuga Lake. It has dozens of majors and minors available in science, arts, humanities, and pre-professional programs.

Student Affairs staff resign due to burnout and low pay